As a result of the twinning of Hasselt and Itami (Hyogo perfecture in Japan) the city of Hasselt is the proud owner of the greatest Japanese garden in Europe. This weekend the garden hosted a Manga and Cosplay convention that added a bit of extra flair.

The garden is a place for contemplation and meditation. Japanese workers constructed the garden and I really felt their Japanese spirit. 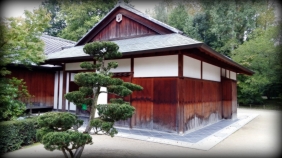 First signs of an Indian summer in Belgium?

The entrance tickets are lovely designed highlighting the most beautiful spots:

The cosplay and manga convention was just the perfect extra for a first visit:

The twinning of Hasselt and Itami also resulted in the Flanders Nippon Golf & Business Club, a site I’m absolutely going to explore in the future.